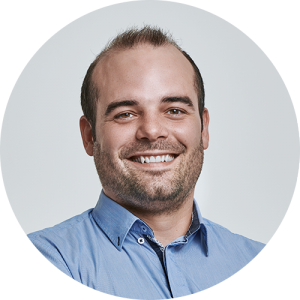 As a Product Manager, Florian deals with the optimisation and marketing of different product groups, such as the WorkMo mobile workplace and mySortimo labels. But it’s the L-BOXX range that is particularly close to his heart.

In our last blog post we gave you six good reasons for using tool tray inlays from mySortimo inlay. However, since we don’t just want to leave it to theoretical application possibilities, I am going to show you three very individual examples from practice, which our customers created in the first few weeks using mySortimo inlay.

For which application the insoles were configured exactly and why the choice of mySortimo inlay was made, I asked Johannes Fendt, dental technician and passionate house builder, a little more precisely:

As a big BOSCH fan, I prefer to use the BOSCH 12V system in my home workshop. I like it that the tools are nice and handy and surprisingly powerful for their size. The small BOSCH screwdriver GSR has been established for a long time, but mini circular saws, angle grinders, hand-held circular saws and the like are becoming increasingly popular. In order to safely and properly accommodate my most important and most used tools and accessories in my L-BOXX, I was looking for a suitable insert. This is how I became aware of the Sortimo online configurator, which I used to design the foam inlay for my content exactly as I need it:

I just like to keep my devices as practical sets, neat and above all safe. For this reason, I have configured an inlay for my L-BOXX, in which I can accommodate the angle grinder and also the cordless screwdriver with associated charger, bit set and a total of three batteries.

The configurator also gives me the minimum necessary distances and warns of collision risks. Therefore, nothing can go wrong with the design. In this way, the space in my L-BOXX is optimally used, even with a foam inlay, and everything has its place. 😉

In addition to Johannes Fendt, we also spoke to other customers and looked at their configurations:

In the following example, a central place for storing batteries should be created in the customer’s service vehicle. Here, the craftsman opted for a foam inlay made of mySortimo inlay because he was able to design the inlay as individually as he needed it. In addition, he also has the option of saving the configuration created in his personal account on mySortimo so that he can reorder it for another vehicle at a later time.

Instead of placing the batteries and adapters in several boxes, as before, they should be stored in a drawer in the van racking system in a central, orderly and material-saving manner. The customer has therefore configured the appropriate inlay for a drawer in width 3 for his existing SR5 van racking.

With mySortimo inlay, the chargers, batteries and adapters are not only stored safely and clearly, at the end of the working day it can be ensured at a glance that all batteries are in the van again. 😉

A very special highlight is this sContainer specially designed and equipped for HVAC installations. This is positioned on construction sites that span several days or weeks, so that important machines, tools and assembly materials are safely deposited and stored directly on site.

This sContainer houses an XL-BOXX equipped with a press from Rems. In order not to have to carry the heavy press jaws in the BOXX, the customer simply configured a bespoke foam inlay made of mySortimo inlay for the drawer of the SR5 shelf underneath.

The expensive press jaws are well protected in the foam inaly and can easily be repacked from the drawer into the XL-BOXX. Another advantage: Since the sContainer is usually used by changing mechanics, it must be possible to check the completeness of the valuable tools quickly after completion of the construction site. With mySortimo inlay, this is done at a glance, since it is immediately apparent whether something is missing.

If you want to store and transport your tools and equipment safely in your Sortimo containers, then just try the mySortimo inlay configurator:

My experiences with the van racking configurator