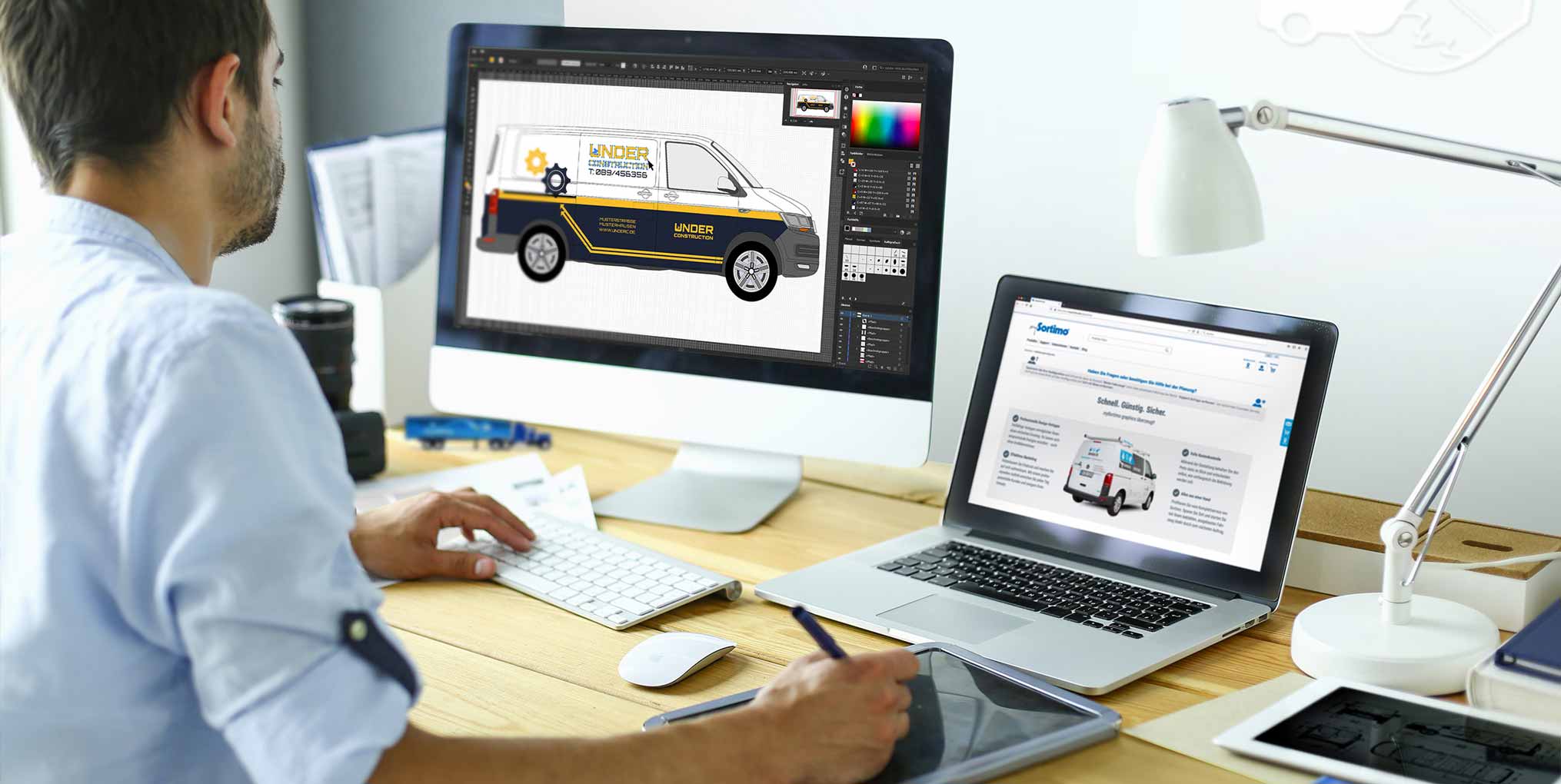 Have your vehicle wraps designed by Sortimo

Sortimo International is now creating designs for vehicle stickers and their application. The company is thus expanding its services to include a useful service for craftsmen and service technicians. For the time being, the service is offered free of charge. For customers who want to create their own designs, Sortimo has added useful functions to the mySortimo graphics wrap configurator, which offers the market leader's customers additional options for designing their vehicle wraps online.

Free design service, also for large-area wraps
In order to offer customers the greatest possible flexibility in the choice of products, Sortimo now offers a design service for the creation of vehicle wrapping. Via a contact form on mySortimo.de/graphics, design requests, vehicle data and logos are requested and sent to Sortimo. Professional graphic designers create an individual proposal according to the customer's specifications, which the customer can order directly online after correction requests and final approval. As with mySortimo graphics, the stickers are applied at a Sortimo branch or station with a sticker service.

The design service is particularly suitable for customers who do not have the time to design their own stickers or for those who want to have a large-scale sticker on their vehicle, which is not possible in mySortimo graphics due to the predefined editing areas. The price of the wrap depends on the size of the film, the design service is free of charge for the time being.

mySortimo graphics labelling configurator extended
For customers who like to be creative themselves or who like to use available templates Sortimo already successfully offers a labelling configurator which has now been optimised by additional functions regarding user friendliness. When starting the application, the user is presented with a selection of design templates from which he can choose the one that suits him best and edit it according to his individual requirements. The existing design elements such as texts, shapes, graphics and images on the vehicle are visually highlighted by a border, which ensures that they are visually captured immediately.

Dynamic tool palette with editing functions
One of the new features implemented in mySortimo graphics is a dynamic tool palette with extended editing functions. This has the great advantage that the user is only shown functions that can be applied to the selected object (graphic, text module, etc.). For example, if the user wants to edit a particular text field, at that moment there is only access to the associated functions for editing it, such as adjusting the font and size, changing the font colour or even the text alignment.

The tool palette has also been expanded to include the option of adjusting the font, aligning several text fields centreed, left- or right-aligned or duplicating selected elements via the "copy to" icon. The user has the choice of copying one or more selected elements and pasting them onto the desired vehicle page. Short cuts via the keyboard and the selection of several elements via mouse are now also possible.

In order to avoid the use of poor quality graphics and image files, the user receives a warning if the uploaded own graphics or images do not have the quality required for production purposes. The error is directly visualised by a red border and a warning symbol placed on the graphic. As long as this error exists, the design can neither be checked nor saved for quality assurance of the created wrapping.

In mySortimo graphics, a yellow border and a centrally placed warning symbol also indicate to the user if a design element collides with non-editable areas on the vehicle. In this way Sortimo guarantees its customers an optimal result in that surfaces that are not suitable for sticking cannot be designed.

Extended upload and editing function of own graphics and image files
In mySortimo graphics, the user now also has the option of cropping uploaded graphics in the configurator. This function allows the user to use only a section of the originally uploaded image. In addition, images can be mirrored with a click, which makes the overall design even more flexible for the user, especially when using a graphic on both sides of the vehicle.
Furthermore, additional file formats are supported for uploading own images and graphics, so that from now on files in EPS, PDF, AI and SVG formats can be loaded into the configurator.